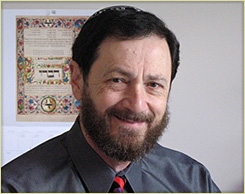 I am Rabbi Jeffery Feinstein, and your first question of me may be...
"What kind of Rabbi are you?"
Quite simply, I see myself as a Modern Rabbi. I was raised in the Reform tradition, but I have a deep love and respect for all branches of Judaism, from the Ultra-Orthodox Chabad to the most liberal Reform and Reconstructionist branches. While I may not personally agree with all of the principles and/or actions of each, I absolutely support their individual styles of Tikun Olam (the saving and repair of the world) and happily join them in their pursuit of reawakening and nourishing the American Jewish spirit.

I was born and raised in California and attended Temple Israel, a Reform Congregation in Stockton. I attended the United States Army Chaplain's School at Fort Hamilton, Brooklyn, NY and served my country in Vietnam in the Chaplain's Corps between 1967 and 1969.
Following my military service, I earned both Bachelor and Master's degrees in Communication, with a minor in Psychology, from the University of the Pacific in Stockton, California.
After a long career in the corporate world, I retired and chose to attend the Rabbinical Seminary International in New York to fulfill my life-long dream of joining with rabbis around the world. Following my period of study, I was granted S'micha.
As a Modern Rabbi, my desire is to reawaken Jewish souls that have become dormant and to encourage Jews of all branches to retain their identities in this era of assimilation. I encourage all Jews to remember they are the People of the Book and pursue meaningful study of our ancient and modern writings. My aim is also to counsel those who may be disillusioned, skeptical or foundering.
Among those of different belief systems, I wish to open dialogues to create environments of understanding and acceptance.
It is from ignorance that fear and hatred spring and flourish.
Create understanding, and love and tolerance can blossom.
- Rabbi Jeffery Feinstein